“We come from a dark abyss, we end in a dark abyss, and we call the luminous interval life. As soon as we are born the return begins.”

Cosmos is paradoxically divided in two parts. The known and the unknown. Everyting that we have perceived, that we are perceiving, seeing, touching, listening, tasting or smelling but also everything we have learned, or been told, everything that we think, believe in, everything that we remember and everything we dream of, everything that we want and everything that we wish for belong to the known. At the really unknown belongs only one question: why do all these exist? A very old question around which different systems have evolved, that have in turn organized societies, developed civilizations and tools for understanding, expanding at the same time the limits of the known without though approaching even slightly the very well fortified, unknown Why. This bright space on the forefront of ascetic is defined between two abysses that are neither hell, nor paradise or purgatory. An illuminated spot in the dark, that exactly because it is illuminated, it is impossible to see beyond it and at the same time to hide in it. 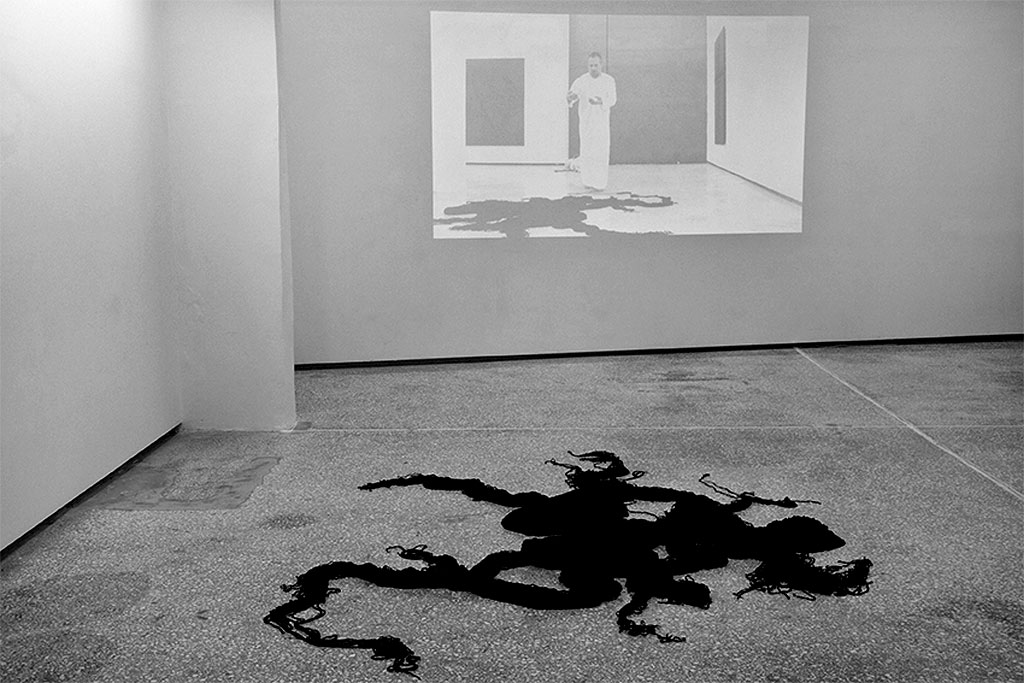 Blind Adam’s work is standing in this limit between the visible and the invisible, in the line that separates the light from the darkness without graduations or shadows. There, image and object, weight and volume, shape and sensation begin to negotiate their limits in a study on the case of the unknown; because it was expressed through the creation and the development, the acceptance and the salutation, the symbolism and the illustration of the idea of holiness. The wings of the guardian angel, the cross of martyrdom, the place of worship with the familiar shape of Kaaba in Mecca, the high throne of a God that sees everything, are one part of this study. The other part consists of works that address directly the human existence, its worries and anxieties, the fear of the unknown, the fear of the return to the abyss of Kazantzakis’ «Ascetic»: the holy carpet of praying, the swirling and the ecstasy of Holy Glory and of course death with the unspecified shape that seems to suck in everything that surrounds it in a deep palpable darkness. The knots and the loops that are the main medium of this body of work are also the measures of scale and time, of the scale of the installation and the time of its creation. They are also the medium through which the solid and fluid are expressed, the absolute materiality and marginal ethereality of the sculptural practice of Blind Adam.